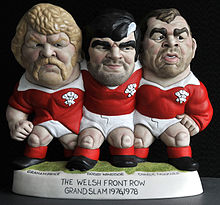 Hey Backs! The Front Row wins the ball (you spill), now they come and collect their tax.

My rugby friend Tim Schumacher visited us and we discussed his work with the forwards of the Pingvin Womens XV’s. He is running a tight program, combining scrum and line-out work with overall fitness. Remember that he himself has quite a carrier in rugby: moving-up from a local club to a Premier League team to the Dutch National Team. After his retirement he was Teammanager for theNational Team for many years. Now living in Sweden, coaching is a natural next step for him.

We discussed how working with a women’s pack is different to men’s pack. How Pingvin should approach the season in order to beat their eternal rivals from Stockholm and much more.

Tim is surprised he is so successful in his new rol and we looked at some development models I am using for an explanation. Taking a teambuilding perspective on it, researcher Albert Carron has these four areas we need to cover:

So, in Tim his work with the Pingvin forwards he has clearly helped them with all these areas: he structured line-out lifting, jumping, throwing, who is where in the scrum and how to optimise total performance (goals) and interacted with the forwards to find out what ticks them (motivation).

Without knowing he also worked on the fourth: Team Identity: he made the forwards special and created a unique rugby culture. Tim introduced the “Front Row Tax”: when the team is having a meal, he told the front row it is allowed to lean over and pick-off anything they like of the plates of backs. They win the the ball during games, the backs have to pay them some “tax” in return. The Pingvin front row players love it!

Great example, I like it a lot! What do you do to create a Team Identity?