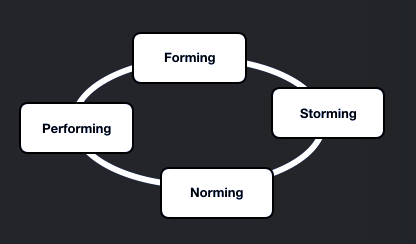 Teambuilding is an elementary part of your work as a coach. Apart from a lot of stuff that might over complicate things I strongly believe that team atmosphere improves a lot when everybody can catch a ball, is fit and can tackle a player. So by simply improving the basic tackling, fitness and ball handling skills, you can improve the team atmosphere by 75%.

A popular theory of Carron defines four different areas of interest for you:

I would like to discuss these four issues separately and I am sure you will recognise elements of it – and they make a nice sort of checklist.

Everybody wants to be part of group. People identify themselves with social groups, so what is being part of the team you coach about? Or is your team still in the catching / passing / fitness / tackling phase? Some aspects to consider are:

Within each team you can define clear roles. Most of them are of course related to the traditional positions. First is role clarity, every player knows what to do in every situation (this is sometimes difficult to define so give your players a sort of minimum requirements list). Secondly is the acceptance of the role. Each player should feel comfortable in the position he is playing. Last is the performance of the player in the role.
So without interfering or worrying about the others, the team performance as a whole is lifted if the focus on personal responsibilities is clear. So:

Apart from the roles on the field you can built a structure around the team “off the field”. Pre-match routines, etc.

Help the team to set themselves clear and realistic goals. Make the players understand that they need to adhere to team standards, each individual player shares responsibility for the success of the team. Give the individual players and the team as a whole feedback on their progress.
Accept no rivalry, encourage co-operation.

When you can meet the individual needs of players, those players will be motivated to achieve. Do you know why your players play the game? Ask for sacrifices for the team, loyalty towards each others. Install a sense of responsibility in the players.

Make a check-list on these four items and set up a strategy to work on each separate topic.

Phases of a team development cycle

Here is a popular model: Tuckman has determined that there are four phases that can be distinguished. Forming, that brings players together, Storming, where players try to establish their place in the team. Norming, this is the moment you should show some leadership in setting up standards in behaviour. The fourth is Performing, your players working together playing the game of rugby! Some say there is a fifth step, ending the team existence but I like to see it as a continuing process. On other pages on this topics I try to give examples of what I did in the past in the perspective of these four process steps.

More on the different components on teambuilding are discussed on these pages: