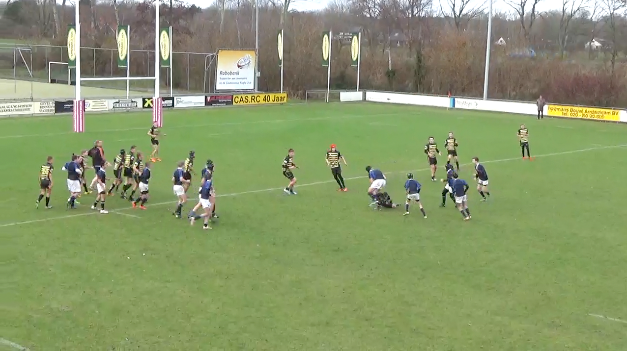 In open play the functional roles of the rugby players are more situational rather then based on the position on set-pieces. What is required from the players depends on the situation. This is where a rugby team with players with both a good collective awareness of space and opportunities and a high general skill level can express themselves.

How to take position? How to give your players a structure to help them decide on this. Pierre Villepreux laid the foundation of what is called Family Play, with this the players can decide on the position and role. Jean Bidal took this a step further and detailed the responsibilities and tasks. The basic idea is that when you know your position on the field relative to the ball, then you know in which family you belong and then it is easy to take the responsibilities and tasks of that family. The Families are defined as:

The most important thing is to communicate and coach the player in front of you. Tell him what you expect from him. Four different roles (or families) are described:

Key is to attack the space, move from playing in front of the defense to playing in the defense. Mismatch. Or off-load in the tackle. Players near the ball carrier should react to his actions and anticipate his next move.

If there is no immediate penetration possible than the Life of the Ball players should work on retaining the ball.

A quick recycle is key, it gives the opportunity to attack wide because the defense will not be well organised. A slow ball will cause you to play in front of the defense again.

These are the players who can carry on the attack if the Close Support player recycle it. This is mostly on the outside of the ball.

These are the players who were involved in the previous phase or the forwards in a restart. They do not have to follow the ball but can form an attacking line on the inside of the Close Support players.

With the Under 12 we can focus on the ball carrier and those near him (Life of the Ball), we have all the other players getting ready: I call these “The Rest”.

With these pages I hope to identify the general tasks in attack that come along with a position. To agree with these tasks is important. Performing the tasks is the third thing.

Doing all three with all the players in the team is a elementary step to building a successful team!