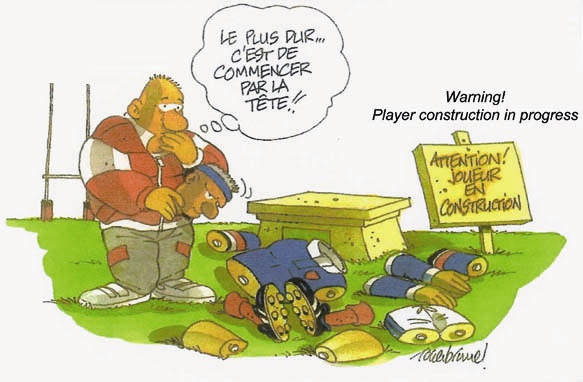 Rugby guru Pierre Villepreux has developed a method to develop Open Play. This post is based on material from the FIRA website and a presentation he gave me. I am very fortunately to have met Pierre many times now and participated in his famous ‘Plaisir du Mouvement’ summercamps in Noirmoutier and Lubersac. His views on Open Play have inspired me and many coaches all over the world. One of them All Blacks coach Wayne Smith.

The topic on an adaptive versus a planned game, or performing seals versus creative players is still hot. We now talk about ‘Heads-up’ rugby: look and play to what is in front of you. Pierre’s ideas are as fresh as ever.

Rather then just repeat Pierre’s presentation, I have put some highlights on this page.

One can question the method of coaching rugby, how to start?…

Definition of decision making for rugby

The capacity of the player to execute an action following some conscious [or unconscious!] tactical or strategical choice.

A game, which includes both confrontation (with the opposition) and collaboration (within the team), in which two opposing teams fight to gain possession of the ball, with the aim of scoring against the opposition, as a result of their individual and collective efforts.

It is the relationship between attack and defence, and the way in which these two alternate with eachother in the course of the game, which lends a particular sense to this definition of the game. This requires that every player must learn to interact not only with his team-mates but do this in relation to the actions and reactions of the opposition.

These three most important rules / aspect of our game influence how we play the game:

Strategic skill is the ability of a player to make the right choices and to perform from set play (Scrum / Line-Out / Penalty /Kick-off / Drop-out). In these situations there is more time to think about a general gameplan and conscious decisions are made.

How to deal with this Adaptive Game and have a learning process that allows the players to be trained? How to give them the appropriate tools to develop both an individual and a collective game? And how to build the game, based on the potential of the individual player and the group?

The ultimate aim of coaching is to develop the teams capacities for adaptation. To train creative players while allowing them the freedom to play an adaptive game in which they are responsible and willing to take initiative.

The learning process (training method) is based on learning using the game itself:

There are different methods used to coach the game of rugby:

Of course we favor the third option: we need to present a game like situation to the players I which we make sure this learning experience will occur. Pierre and his fellow coaches of Plaisir de Mouvement have developed a whole method based on this angle. In their exercises the attackers have little restrictions and normal rugby rules apply. The defense is restricted by starting position or by number, thus creating an advantage in the balance between attack and defense. So, in this educational approach the learning situation is created by manipulating the defense.