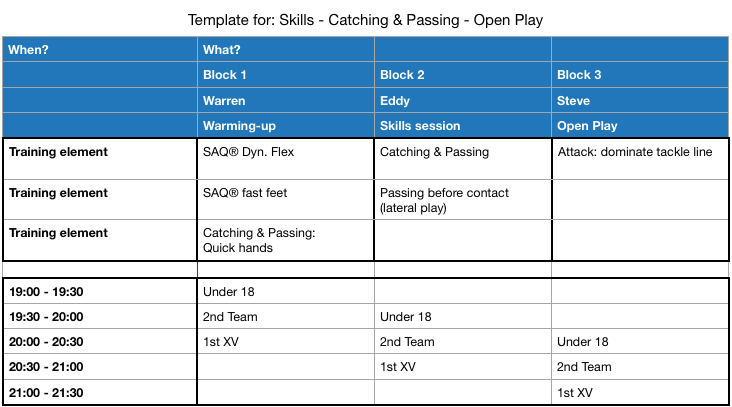 How to schedule your sessions when you want to use specialist coaches on more teams? Many, many years ago the NRTV (Dutch Rugby Trainers Association) organised a clinic and the coaching staff of Bath was in the Netherlands to present rugby and  their organisation. Back in those days Bath ran two teams and a development side and Bath thought all three were equally important:

Bath had lots of specialist coaches and trainers and needed to set up a way to maximize that knowledge across all three teams. During that evening in Leiden they presented a sort of staggered schedule that looked pretty complicated. But shortly after I was made coach of RC Hilversum and needed to organise all the help of past top Hilversum players so I looked at it again and implemented the set-up.

Below some different variations: the first is of a session where the focus is on skill development. You see how I have set-up for blocks of half an hour and how the trainers are assigned per block (I used fictional names to give you an idea).

So training starts for the Under 18 at 7 p.m. with Block 1. Training for the second team starts half an hour later with Block 1 too, etc.

This way we make use of “Warren” who knows a lot about all the aspects of Warming-up and activating the players mind and body and “Eddy” who is fantastic skills coach for “Catching and Passing”.

And of course you might want to combine teams for example if you want to do live scrumming instead of using the sled, or want to work in Open Play with full squads. This is done in the next example.

This way the headcoach who coordinates the planning simply has to decide on the Goals and Training Elements for a given period and detail multiple copies of this schedule to assign and communicate the work to be done. Of course you can use Supercoach Online to help you detail all this and built the actual session.

This worked at Bath in the nineties of course and it worked like a dream at Hilversum where I ran this for three years, the first season the 3rd team got promoted, the second season the 2nd team. When we did not make it as National Champions in the 3rd season, the schedule was supposedly one of the reasons and the club decided to go back to the one coach per team approach……

← Get the basics right!
Manage your Chimp! →