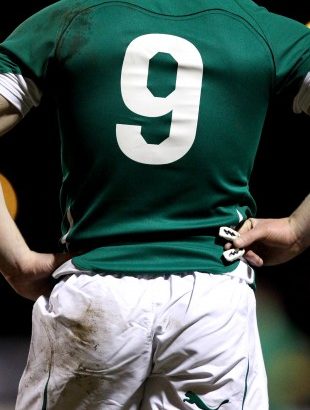 (Also known as Inside Half and Half Back) this player has to be an all-rounder, an excellent passer to both sides, can kick with both feet, a good defender around the maul & ruck and in cover, and an agile elusive runner who can recognise a gap and have a “just go for it mentality”. Apart from these technical things, the Scrum-Half is also The Director, all the forwards work hard to give him (and the Fly-Half) the best possible ball.

Statistically, the Scrum-Half is the one who has the ball the most of all players! Make sure you put your best overall player here. Speed and accuracy of passing is more important than length. Many Scrum-Halves slow their backline down (less time and space) by winding up to throw long passes: no back-swing. Avoid reaching away when picking up the ball, this will cause imbalance and a difficult swing. Try to get above the ball, or take a step back after the pick-up. Adapt the type of pass to the situation: dive – pop – spin. The dive pass is totally rediscovered by Alan Bunting and the New Zealand Women’s 7s, fantastic and spectacular to see!

The main task of the scrum half is the distribution of the ball between his forwards and his backs. Like the Fly-Half, he should have vision to put his backrow or backline to work. A Scrum-Half who can make breaks, on the blind side or past the ruck or maul is a potent weapon because it forces the opposition to focus on several areas of defense, both physically and mentally.The Scrum-Half is also the coach of the forwards in organizing their body positions in mauls and rucks. Demand they clear the ball for you, either by driving over or by popping it up.

Yes, the Scrum-Half should also be able to kick the ball when his Fly-Half (the principal kicker of the team) is under pressure. Kick behind Line-Outs and scrums (“in the box”).

Rhythm: Step – Step – Kick: you do not have much more time, so you need to be able to kick facing many different directions.

The Scrum-Half needs to have a good tactical perspective on defensive lines to play an important role. Most of the time he is the second or third line of defense.

Key issues for the scrum half

With these pages I hope to identify the main tasks that come along with this position. To agree with these tasks is important. Performing the tasks is the third thing.Doing all three with all the players in the team is a elementary step to a successful team !

Note: this page is based on IRB coaching material, my own experiences and feedback from other coaches. Thanks Norman!