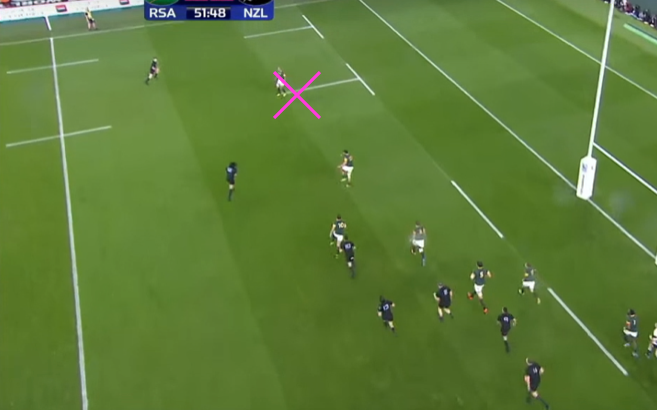 Posted in About coaching, Positional Stuff

Rugby 2v2, The race to the space

The 2v2 in rugby, a special tactical concept!

The very young players have an egocentric mind and when they have the ball they run into the space. Sometimes this is running across the field to the other side because they learned there is always space outside.

It is a key step in their development and I never discourage this (unlike coaches that I sometimes hear shout “NOOOOO, you are running away from your support!!!!!”).

But what is the next step?

Attack the space between defenders

By attacking this space the defenders have to move into this space too and you “open the door” for your support players. Key is then to off-load the ball to these players attacking the new gap that has been created. This ‘Duel’ and playing in the defensive line is an important concept in rugby and we can teach this in U12 already when the players not carrying the ball can be involved more.

Race to the space

A bit similar but with a twist. I start with an example. Ma’a Nonu is in a 2v2 situation but with lots of space.

Somehow NZLD has created a huge amount of space on the left side. Ma’a starts in a 2v2 and he attacks the space in the middle. If he manages to beat his direct defender he created a 2v1 and a big opportunity for him or his wing to score.

Same in this clip: Tim Mikkelson is running across the field (like that 8 year old in the start of the post) until he recognises a weakness in the defensive line and the race to the space is on. Tim wins and Kurt Baker scores (thumbs up!)

When the race to the space is on, other opportunities are created too. In the below clip Sanne is racing to that magic spot and her direct defender is already late entering the race and is desperate to catch up. This allows Sanne to step inside and with no shadow defender she now can race to the try-line.

How to win the race to the space?

Of course you need speed but tactically you need to pick the right running line. There is this magical “X marks the spot” where Ma’a, Tim and Sanne run towards.

How do you know where “X” is? I never had the opportunity to ask Ma’a or Tim. I have seen Sanne do this lots of times and asked her, she answered: “I just know…..”

I think the “X” is somewhere close on the inside of that second defender.

Can we teach this?

I think we can. How I do this: