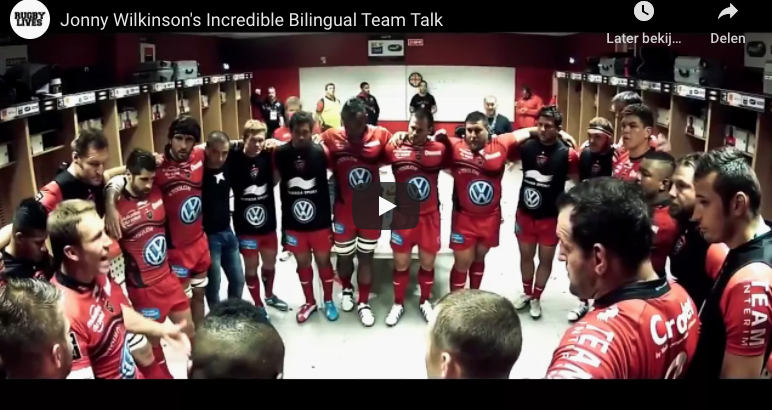 What to say in the half-time talk?

I played Full-Back at RC Hilversum and was lucky to be in a team that won National Championship three times AND had John van Altena as inspirational captain. What do I miss not playing? Not hearing John talk about what needs to be sorted at the half time talk. Getting that passion and intensity of him beamed into us and going out and destroy the opposition! Sometimes you have the feeling you walk out and are simply are not going to loose, no matter what will happen.

I already was a fan of Jonny Wilkinson and liked how he adapted to the French rugby competition. Toulon did very well but missed the double. They tried again next season and we drove to Paris for Jonny his last match. Later saw this speech when I got the DVD.

I felt I was back in the changing room with Altena talking to us and ready to go. I was very much part of this great game we all love again.

(Fun fact: we peeled the match poster from the window of the St.Denis SuperMarche on the way home…)

What to talk about at half-time?

Remember we are not playing that double, you are not Wilko, no you are coaching amateurs or kids even. Half time is a great moment for you to focus the team.

Even Wilko kept it simple. These great players and their background of championship titles, they only needed to be reminded of what to do: “placage, placage, fini, ballon:  tackle, tackle and win the ball!”

Are you into this perhaps: we are all different, so we need to address players accordingly:

So I know coaches who touch all four NLP types, and you can easily see how the players can coach each other here.

Who wants to be sub’ed?

You are in control, I remember when a youth coach asked at half time “Who wants to be substituted?” and his three top tacklers sticked their hands up: they were very tired…. Better idea to have a more balanced team out all the time, in both defence and offence and have this half time routine:

Fun to sneak in the huddle and hear the Sevens Coaches. I liked Sean Horan when asked the NZLD Women’s Sevens team: “How did that feel making that tackle?” “Good? Do it again!” reinforcing that belief. Gordon Tietjens with very specific tactical advise. Ben Ryan: “That is a shadow of the team that played the last two days, …, sort yourself out the next ten minutes”.