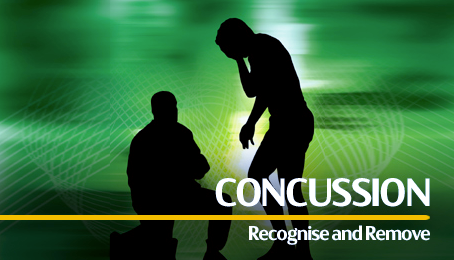 One of the most serious but least appreciated injury in rugby is the concussion Let op: ik heb een Nederlandstalige pagina over hersenschuddingen en rugby hier.

Concussion or more formally known as a closed head injury. Many players recall getting their “bell rung”. The majority of concussions if recognised and managed appropriately are not very severe. However, failure to properly assess, evaluate and treat a player with a concussion can result in long term brain damage known as post-concussion syndrome. Post concussion syndrome has been recently been brought to the publics attention and identified in several football players and resulted in several players early retirement. Further, allowing a player with a concussion to continue to play or return to early may result in what is known as second impact syndrome and cause severe brain damage and death. A concussion is not a right of passage but a serious injury that needs to be taken care of promptly and appropriately

While many rugby players may think their brain looks like a rugby ball, the brain actually sits in the skull similar to a sponge in a jar of water. A concussion occurs when there is a blow to the head causing a rapid deceleration of the skull. The brain, however, will continue to move within the skull and impacts against the skull wall thus bruising the brain. The brain is now injured, and is now at increase risk for hemorrhage or additional swelling. So a second impact even minor can now produce fatal swelling and or hemorrhage.

Three types of concussions can be pointed out with following symptoms:

What can be done to prevent these tragic consequences. The important thing is to recognize these injuries on the field and have qualified medical personnel evaluate all concussions. The following key points in assessing someone who has been hit in the head.

1. Error on the side of caution.

Rugby is only a game, if there is any question of the players fitness to play, He/she should not be allow to continue.

If there is any loss of consciousness, even if briefs – seconds – the player absolutely should not be allowed to continue .

A unconscious players on the ground has a neck injury until proven otherwise. Do not attempt to move him until he/she has been properly evaluated by qualified medical personnel. Any player with prolonged unconsciousness or does not respond to questions (>15 seconds) should be sent to an emergency room via ambulance for a complete evaluation. The unconscious player should not be moved without the aid of personnel trained to handle possible spinal cord injuries.

4. Questions to ask players with a concussion

What is your name?
Keep it simple and begin a conversation especially if you do not know the player.

What happened to you? How did you get hit?
This is a easy way to assess the players awareness and memory.

Which team are you playing against?
Asking the day or location is unreliable because most players know they play on Saturday.

What did you eat for breakfast and the night before?
This assess retrograde memory loss.

Look at the SCAT2 protocol card on my Free Download page for the formal protocol.

If there is not obvious loss of consciousness have the player get up to his feet without assistance. Observe for any difficulties with balance. Any difficulties, what so ever he/she should not be allowed to continue.

If the player is allowed to continue keep an eye out for him/her. Any player whom seems dazed, unbalanced on their feet, is not keeping up with play or is playing below their normal level of play should be pulled out of the contest.

Players, coaches and officials should recognize that leaving a game is not a sign of weakness, especially when the player is not playing to his full capacity. Help your teammates by assisting officials in convincing injured players to leave the game.

The ‘Graduated return to play programme (GRTP)’ is based on the amount of time it takes to assure healing of the brain and the ability to protect the head/brain from further injury during a practice or contest. The current rugby laws require that a player with a concussion not to play for three weeks. This means that the player is not allowed to participate in games or practice for this interval. If there was no loss of consciousness, no memory loss or persistent headaches, conditioning activities may be resumed earlier. An earlier return to play is allowed if a player is cleared by a sport medicine physician or neurologist. It is to be recommended that referees report all concussions to union medical officers for follow-up. If a player suffers more than one concussion in the same season, the player should not be allowed to returned to play that season or the next unless cleared by a qualified physician.

For guideline overview according sports medical / neurological opinion see the next table.